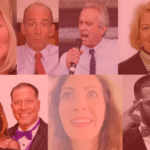 You may have heard the myth that the COVID-19 vaccines make women infertile and that they have killed more people than the disease itself. This blatant and harmful misinformation does not appear anywhere on social media; it has to be crafted. Those images with scary quotes are made by individuals who upload them to Facebook, Instagram, and Twitter for their followers to disseminate like mind viruses. There is something at once encouraging and deeply sad when you realize that all of this hazardous nonsense is the product of a very small group of influencers.

The Center for Countering Digital Hate (CCDH) has recently released a report entitled The Disinformation Dozen, and its main take-home message is that two-thirds of anti-vaccine content is shared or posted on Facebook and Twitter between February 1 and March 16, 2021, can be attributed to just twelve individuals. Twelve. Let that sink in.

The modern anti-vaccination movement is led by a relatively small number of devoted and typically well-financed influencers who have accumulated a mighty following on social media platforms, where fear spreads more easily than facts and nuance. So who exactly is the Disinformation Dozen?

The top names on the list will not surprise anyone. Joseph Mercola is the head of a massive kingdom of medical misinformation and silly supplements. His combined reach on social media is 3.6 million followers, so when he shares a falsehood about “forced vaccination” being part of a plan to “reset the global economic system,” that post has legs.

Robert F. Kennedy, Jr, is perhaps the most visible and vocal leader of the anti-vaccination movement and his membership in the Disinformation Dozen was expected. Then there’s Ty and Charlene Bollinger, best known for their “Truth About Cancer” brand which is anything but, and Sherri Tenpenny, an osteopathic physician who recently tweeted that the longer you wear a mask, the more unhealthy you get (not true). Christiane Northrup also made the list. An icon of women’s health, Northrup has embraced all sorts of magical ideas while encouraging her fans to follow their gut and ignore their reasoning.

There’s also power couple Sayer Ji and Kelly Brogan. Ji’s GreenMedInfo website was the subject of an article of mine. It is a colossal exercise in the cherry-picking of scientific studies, a portal curated by Sayer Ji himself, who has a bachelor’s degree in philosophy. Meanwhile, his partner, Kelly Brogan, is a “holistic psychiatrist” and former goop contributor.

The couple’s descent into spirituality—a phenomenon in which adherents weave together grand conspiracy theories and a yearning for a spiritual revolution—was described by journalist Matthew Remski. Recently, Ji shared a false claim that Pfizer’s COVID-19 vaccine had killed more people than the disease itself. He remains active on Facebook, with half a million followers, despite violating their terms of service.

The Disinformation Dozen also includes personalities I had never heard of. Ben Tapper is a chiropractor who claims the pandemic is an excuse for governments to control the population through a “blanket of tyranny.”

He was recently part of a virtual event alongside notorious über conspiracy theorist David Icke of “shapeshifting reptilian” infamy. Another member of the Disinformation Dozen is Rashid Buttar, who has a long history of using pseudoscientific interventions like chelation therapy for autism and intravenous hydrogen peroxide for cancer. And let’s not forget Erin Elizabeth, Joe Mercola’s partner, who claims that turmeric is better than chemotherapy.

Perhaps more troubling are the remaining members of this influential social media family: Rizza Islam and Kevin Jenkins. Their misinformation has been focused on the African-American population, which has been disproportionately affected by COVID-19. The CCDH report points out that Jenkins used the Facebook live-streaming feature last January to broadcast a speech to his digital followers.

The video has now been deleted, but in it, the CCDH reports that Jenkins said of the COVID-19 vaccines: “They are spending a trillion dollars to convince you [the Black community] that it’s OK to kill yourselves [with the COVID vaccine].” Meanwhile, Islam has an Instagram account called “Not Another Tuskegee Experiment” which compares the use of the COVID-19 vaccine in African-Americans to the inhumane treatment of Black men with syphilis who were left untreated to essentially see what would happen.

It is outrageous to witness such a tiny group of misguided advocates pumps gallons of harmful falsehoods into the information ecosystem. It is equally outrageous to see how ineffective social media companies have been at plugging the drain.

Given the stances of Facebook, Instagram, and Twitter with regards to COVID-19 misinformation, you may wonder why the Disinformation Dozen has not already been banned from these platforms. In fact, research conducted by the CCDH in 2020 revealed that social media platforms actually fail to act on 95% of the COVID and vaccine misinformation reported to them.

My own experience in reporting a particularly egregious YouTube channel to its parent company, Google, mirrors this. Even though the user was regularly publishing videos in which she claimed COVID-19 was caused by 5G and that the public health measures would end up killing us all, her channel remains active to this day. Her videos were reported multiple times by different users, and I even chatted with a Google customer representative to submit the channel for a hands-on review. Nothing happened.

As the CCDH report summarizes, “the public cannot make informed decisions about their health when they are constantly inundated by disinformation and false content.” But social media companies try to have their cake and eat it too: they announce a clamp-down on dangerous misinformation to satisfy the majority while failing to enforce their own rules to sustain a lucrative engagement market.

The end result is that nine members of the Disinformation Dozen remain on all three platforms (Facebook, Instagram, and Twitter). Only three of them—Rizza Islam, Sayer Ji, and Kelly Brogan—have been comprehensively removed from one of these three platforms. The presence of both open and closed groups on Facebook, which anti-vaxxers can use as echo chambers to recruit the vaccine-hesitant, worsens the issue. The 30 anti-vaccine Facebook groups the CCDH looked at generated up to 10,000 posts per month. Imagine being exposed to this volume of fear-inducing untruths day in day out. What might it do to your decision to get vaccinated or not?

Vaccine hesitancy spreads in long-term care home worker circles. It can affect nurses, physical therapists and frontline workers who, if they ultimately choose not to get vaccinated, run the risk of spreading the coronavirus to large numbers of often vulnerable people. This hesitancy can only be fuelled by anti-vaccination lies and falsehoods. The response of social media companies so far has been akin to a Band-Aid on a sucking chest wound. The CCDH’s report provides a perfect illustration of this on page 30.

It is a screenshot from Sayer Ji’s now-removed Instagram account. In large black letters on a stark, white background, he wrote, “I refuse to participate in a medical conspiracy that says wearing a mask is healthy and we all pretend healthy people are ill and can make us sick.” Underneath this arresting statement is a tiny notice in red. Scroll too fast and you’ll miss it. It says, “Missing content: Independent fact-checkers say information in this post could mislead people.” These notices are not enough. The chest wound keeps hemorrhaging while the Band-Aid disappears underneath the crimson blood.

Take-home message:
– A recent report by the Center for Countering Digital Hate (CCDH) notes that 65% of anti-vaccine content shared on Facebook, Instagram and Twitter is attributable to a dozen people
– This Disinformation Dozen includes well-known anti-vaccination activists such as Joe Mercola and Robert F. Kennedy, Jr, as well as influencers like Rizza Islam and Kevin Jenkins who deliver anti-vaccine falsehoods to the African-American population
– Social media platforms fail to act on 95% of the COVID- and vaccine-related misinformation reported to them, according to an earlier report by the CCDH