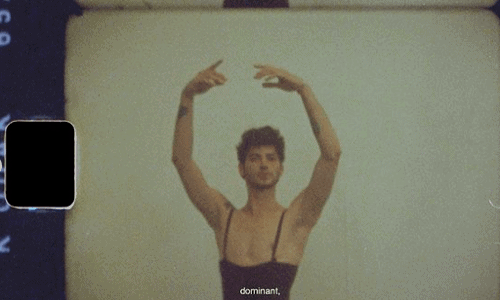 Andy Sousa: Owner of @badboysballet, a teacher at @starsdanceco, and an impeccable dancer from Cuba. dancer: @andysousa_official, @NOWNESS and @gillianzinser have directed and produced a piece which challenges masculinity (in Cuba and globally). The portrait of Andy Sousa recounts his life in Cuba as a dancer and narrates his struggles growing up inundated by hegemonic masculinity.

“In Cuba, you are taught to not express yourself

‘BE A MAN’ shares Andy’s encounters with said pressures; bullying in his youth, having been denied his identity through people trying to compromise his heterosexuality and masculinity. Despite that, Andy represents a liberating reconceptualised form of machismo.

Despite living across the North Atlantic, the relatability is off the scale. Masculinity has always been defined for me, but conforming has never been a strong attribute of mine. Authentically expressing myself at times has been challenging. Perhaps those challenges gave me strength and figurative masculinity; not conforming to what society has phallically constructed to be “masculine”.

BE A MAN’ opens up a conversation concerning men’s contemporary understanding of hegemonic masculinity. It also challenges what the social nature of gender should resemble. ‘Gender prioritizes practices of what is interpreted as masculine or feminine, and culturally differentiates gender by specific ways of acting and thinking’, (Hernandez, 2000). Andy’s resilience denies this process of socialisation. With the support of his father, age fifteen Andy joined the Cuban National Ballet Company. And now, with his resilience and success growing, he lives in Florida. The director, , stated, “As a storyteller, I’m drawn to exploring and confronting stereotypes and celebrating the resilience of those like Andy who have learned to live authentically and find freedom in their own skin” (NOWNESS.COM).

Social and cultural characteristics are embedded with misogyny and toxic masculinity globally. Take this silliness as an example: ‘Masculine identity revolves around what characterizes patriarchal culture, with a predominance of power in economic, political and social arenas, in which the feminine is of a “lower nature”’(Badinter, 1993; Gilmore, 1994; Menjívar, 2004). ‘BE A MAN’ contests this notion; Andy shares his divine physique, miraculous movement, who he is and his definition of masculine. Aforementioned, since what defines masculinity tends to be culture, different communities create their cultural sanctions which in turn is used to distinguish your character. Although this practice is widely used, I believe there should be freedom to an individualistic approach — rather than cultural submissiveness. “Masculinity” has been known to be attributed with inexpressiveness and emotional restriction.

Andy moves through each shot unimpeded and states [English Translation]:

That I can’t express with words

So I dance instead”