Relationships of all types are susceptible to draining emotions.

Abusive and toxic tendencies do not exist solely in romantic relationships. Friendships of all lengths and depths are equally susceptible to draining, stressful, and negative emotions. Every relationship—familial, friend, or romantic—will experience conflict at some point or other. However, the difference between the conflict of a normal relationship and a toxic relationship is the repetition or continuity of the toxicity.

A major aspect of being human is acknowledging our free will and the repercussions from that freedom. We may not always choose the right or good path to take and sometimes we make decisions out of anger or stubbornness. Recognizing errors, making amends, and continuing to evolve is how healthy, nontoxic people separate themselves from narcissists. Unfortunately, healthy people often find themselves in close relationships with narcissistic individuals, and the resulting toxicity leeches the very health and well-being right out of them.

Being overly competitive, lacking empathy, withholding support, and constantly tearing down other people are all toxic and narcissistic traits. All humans are prone to competitiveness and pettiness, but for a narcissist, cruelty is a way of life. Gaslighting and obsession with control are not unique to romantic relationships but can also friendships.

Weddings and engagements are notorious for bringing out the worst in any bride, and Victoria’s former friend Grace was no different. “My friend was engaged and planning her wedding. We had been friends for a few years, and she was the godmother to my child,” recalls Victoria. Grace and her partner were originally from the same city but decided to have a destination wedding. Grace asked Victoria and her godchild to be in her wedding, and Victoria happily accepted. However, as the wedding planning went on, more and more toxic traits began to strain their friendship. “Grace decided the wedding would be on a Sunday evening, with other events beginning on Saturday morning. I started to panic because now I would have to take off more days from work, add on days and nights to the resort bill, and take my child out of school for more days than expected.” As a single mom, Victoria had to plan every penny very carefully. To add to the bill, the wedding was right before a major holiday, “and the plane fare was through the roof.” 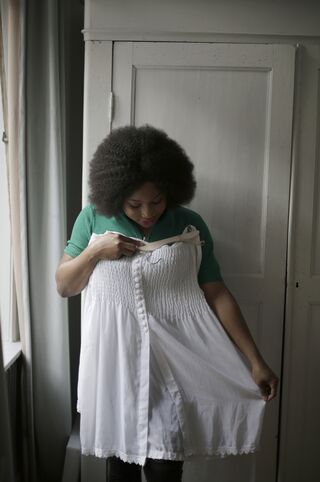 The next red flag was the disagreement over the bridesmaid dresses. Whereas some brides choose very expensive gowns, Grace was the opposite. However, with the cheaper price tags came another road block. “Grace wanted to order the dresses from a very, very cheap company overseas. I was already nervous about the plane tickets and travel costs for the wedding so a cheap dress was a relief”, says Victoria. However, the dresses were not accommodating size-wise. “The largest size they came in was comparable to a size 10/12 in US sizes, and I needed at least a 14/16. I have a naturally large bust, so everything else was fitting except the chest area. I took my measurements several times and the size chart stopped before I began.” Frustrated, Victoria tried to talk to Grace about finding a similar dress at a better, more accommodating designer but she refused. “All of her cruelty suddenly came out. She said the other bridesmaids were not having the same issues: They weren’t complaining about the sizes since they fit in the dresses, and I was being dramatic,” says Victoria. “I was already upset and feeling so ugly and fat, and I was mortified I couldn’t fit into this tiny sample size dress. I expected my friend to be understanding, since she also struggled with body issues, but instead she began fat-shaming me. I ended the conversation because I was just so embarrassed, even though logically I had nothing to be embarrassed about.”

A few days later, Grace asked Victoria about her flight plans, and Victoria admitted she was very worried about how to pay for the trip. “Without a second thought, Grace told me I didn’t have to be in the bridal party if it was going to be such a problem. She began saying that I was guilting her for HER day, that I was the one being mean and unaccommodating, that I was ruining everything. She was my child’s godmother, and she dropped us as if we meant nothing to her. All those years of friendship were thrown away because I was too fat and too poor. Her parents didn’t even go to the wedding because they couldn’t afford the travel, and Grace didn’t care. She said they were the problem and not her.”

Attack of the Ego

Anthony has been a certified wedding planner and consultant for over 30 years. According to him., “It is entirely possible, and not at all expensive or stressful, to make sure your bridesmaids are comfortable and confident. There are so many options out there, and bridal shops are more than willing to work with the bridal party to ensure everyone feels like a queen.” Some brides are simply difficult, Anthony says, and are only concerned with themselves. “Those are the bridezillas, their narcissistic ego comes through, and many relationships simply never recover.”

Looking back, Victoria realizes that Grace was allowing her toxic, narcissistic traits to show through. A non-narcissist would have been disappointed about the dresses not working out but would have cooperated with her friends to find an alternative. There would have never been fat-shaming or blaming her friend for not being able to afford plane tickets: These are all tools of a narcissist. Turning the tables with guilt, shame, and embarrassment and attacking someone’s weaknesses is what keeps a narcissist in control. Victoria had found identical dresses, available in larger sizes from another company, but Grace refused to even look at them. 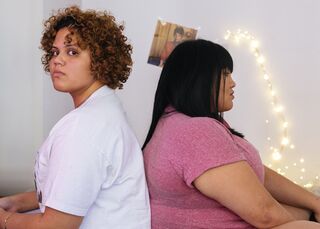 Narcissists have a very subtle and tactical method of attacking people, even those they claim to love. Toxic individuals will identify their opponent’s weak spots and use them when the situation presents itself. Victoria’s worry over the expenses and the stress of needing to fit into a too-small gown was a sharp knife Grace used to get Victoria to back out. Grace was very tactful in not demanding Victoria step out of the bridal party; instead, she made it sound as if it was Victoria’s choice, then guilted Victoria for a choice she never even made.

It is important to remember that under such a brash façade is a very weak individual with her own fatal flaws. Grace herself had a negative body image but projected that on to Victoria, who refused to apologize for needing a different size. “Grace made sure to tell me that all of the other bridesmaids were sizes small and medium, and no one else was complaining. Even though I was her friend, I didn’t fit the image she wanted for her wedding day. So, I was out. Not even a second thought for my child. She said she had other friends with children who could fill in. It was nice to know that my child and I were just space fillers.” Grace and Victoria haven’t spoken since.

Narcissists also struggle with intense jealousy of other people while simultaneously feeling superior and elite. No one is allowed to be smarter, or more powerful, important, or beautiful than the narcissist. As seen with Grace and Victoria, shame is a powerful tool for narcissists who need to regain their control in a relationship.

Hannah describes a former friend, Maisie, who used shame and superiority as her favorite attack methods. “Everything I did was wrong or not good enough. She constantly competed with everything I did. If I ever had something positive in my life, she would downplay it and tell me why her life was so much better.” To a narcissist or anyone with an inferiority complex, they must be the best in all situations. If someone else has a success, it must be followed up with a better story or outcome by the toxic friend. Hannah would make a statement, and Maisie would discount it or claim Hannah was wrong. Maisie would repeatedly call Hannah a liar or stupid or dumb; even when presented with evidence, nothing was legitimate unless Maisie herself found it first. In one situation, Hannah had information to back up her claim about a company work policy; Maisie went as far as downloading the handbook and still refused to admit Hannah was correct. Hannah says that was the last straw, and she realized she needed to establish boundaries. 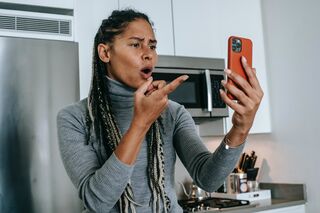 “I explained that she was making me upset for how she was treating me, and despite how much proof I showed her, she kept telling me that I was lying and wrong and she was right and knew more and was better. She told me to either shut up and drop it or not be her friend anymore…I immediately knew where I stood in her life and how I was never going to be happy being her friend.” Hannah describes their friendship as exhausting and mentally abusive. The friendship caused Hannah to doubt herself, her abilities, and her intelligence, and she realizes now how it was never a friendship in the first place. Narcissists never have close relationships for any purpose other than to benefit themselves, even if that means destroying another person in the process.

Boundaries exist not to keep people out but to protect oneself from hurt, hatred, and mental attacks. Victoria admits she misses Grace, “but if she didn’t want to stop focusing on herself for one moment to listen to my concerns, then was she ever a friend in the first place?” Friends are meant to help you grow, encourage your positive lifestyle changes, and provide a safe place to unload and cry. Tearing down your successes or reveling in your failures is not the sign of a true friend. It takes just as much energy to listen and support as it does to laugh, point, and gloat. However, it takes more time to solve a problem than to walk away from it, and narcissists will always take the easy way out.

Hannah reflects: “That friendship’s ending was a huge relief, and I now have very strict boundaries with friends. I never really thought narcissistic people existed as friends, but more as partners or in family relationships. After that experience, I put up a lot of boundaries with all of my platonic friendships, and a few more people walked out of my life because they didn’t like the boundaries I put up… but I’m much better off.”