How to Deal with Narcissists and Know-It-Alls

People who need to be right. 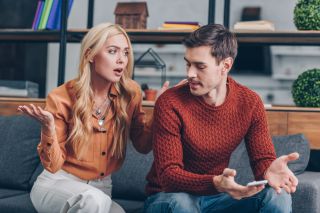 But the most devious and difficult know-it-all is the one in our personal relationships, who cannot concede that there’s mutuality in all interacting.

If you don’t agree, there’s something wrong with you. You’ll be cut off. There will be a fight. Or you’ll just be dismissed. Or diminished. Black and white.

The Need to Be Right. There are many ways that people arrive at the urgency to be right; different paths leading to Rome. Poor Rome! A person can have a Narcissistic Personality Disorder, needing dominion over others. When failing to do it with charm, it’ll be with cutting anger.

A person can have a Borderline Personality Disorder, becoming desperate if something fails to go their way, as if the world’s falling apart. Attachment is fragile. If they believe you are confronting or distancing, the emotional price will be excruciating. And their sense of certainty is as solid as it is disturbed.

People struggling with personality disorders—narcissistic, borderline, anti-social—are really quite fragile at their core. Winning. Being right. Having control. These are desperate maneuvers. But everyday maneuvers for these folks. To be in a relationship with a truly impaired person is a little like being in a cult. You are diminished, enmeshed, and it’s tough to extricate. It’ll always be your fault.

Don’t Need a Diagnosis to Know It’s Wrong. That being said, most people don’t have personality disorders, and there’s nothing wrong with wanting to be right. Nothing wrong with thinking carefully and arguing for your truth. Nothing wrong with critiquing another’s position, as long as you’re open to critique of your own. The problem is when the need to be right trumps the path towards curiosity and better communication. When this happens something destructive can play out, often among people who care about each other.

Most know-it-alls don’t have a psychiatric disorder. They just need to be right more times than not. Difficult does not mean psychiatric. So be cautious about diagnosing folks you know.

Jerk is not a bad four-letter word. You can think of others.

Yes, the know-it-all in your life may well not have a verified personality disorder, just a personality problem. But, there is always the other hand. If you’re unfortunate enough to be in a relationship with a truly disturbed person or have to deal with them in business, consider distancing. Relating reasonably to a person with a formal personality disorder is quite difficult, hence the diagnosis. That’s a small percentage of the population.

The real problem with controlling types in the vast majority of cases is interpersonal—having a meaningful relationship as a parent, a child, a partner, or a sibling.

What happens is that when many people enter the interpersonal space, they get triggered and regress, and need to be in control.

Intimacy and Control. There’s something about intimacy—closeness—that brings out the best and worst of us. I like to call this the field of intimacy, as if it’s a phenomenon from physics, similar to a magnetic field. An intense relationship serves as a psychological field.

A person acts by one set of rules outside of the field, but once inside, the rules change; sometimes for the better, with compassion and love—and sometimes for the worst, with anxiety and control. That’s why so much drama inside a household can go unseen elsewhere. And, while you may be unhappy, some friends may think you’re lucky or you can pretend everything is fine because that’s how it looks. Of course, you know better.

If you enter their world, you’ll be positioned either to agree—and be validated for all the wrong reasons—or disagree, and portrayed as misinformed, angry, or defensive.

Accept and Decide. We must all accept people for who they are. We cannot change others, by and large. But we can decide how we want to deal with them. This is called individuation, defined as the capacity to objectively assess a relationship and decide how to respond. If your partner, parent, ex or relative needs to be right every single time, recognize it for what it is.

If seriously controlling behavior happens now and again, it’s part of living. Step back and ask yourself what you’re dealing with. Breathe through your anger. Tit-for-tat rarely works. Can this person be approached? Is letting it go just this once a viable option?

Or, do you need to distance because the behavior is oppressive and not going away?

Often we get sucked into relationships with people who need to win. Either we want to be told what to do, or it brings out the dependent side of our personality, and we’re unusually comfortable with taking direction even if we don’t like it. Perhaps you had parents who didn’t know how to validate your own voice?

This may be a replay of something very old in your life.

Or conversely, the know-it-all can bring out your own need to win.

The Politics of Listening. Let’s not go too far down the road of politics or religion, but they need to be right can affect our thinking here as well. There are some things that are just wrong. Fascism. Racism. Bigotry, Homophobia, Anti-Semitism. Sexual assault. The list goes on.

In the current moment, we’re losing the capacity to talk through differences with one another. The need to be right can sometimes interfere with important social and spiritual debates. Whenever there’s a political or religious conversation, it’s important to look inside and make sure your position comes from a conviction and clear self-knowing, and not from a place that requires submission.

Left, right, center, up, down, front and back, that will end no place good.

Some Thoughts to Ponder

So while labels like a narcissistic, borderline, sociopath, and more get thrown around, the person who needs to win is usually not a person with a psychiatric problem. It’s simply the person who does not possess the capacity for self-reflection and humility that’s so necessary for normal interactions. And often, it happens within the context of a close relationship, which is why the know-it-all creates such unhappiness all around.

Mark Banschick, M.D., is a psychiatrist and the author of The Intelligent Divorce book series.

Tags: know it all, listening, narcissim