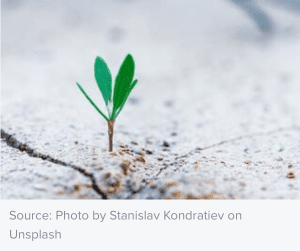 That which does not kill me, makes me stronger.”  ~ Fredrich Nietzsche

German philosopher, Fredrich Nietzsche first shared these words in 1888 in his book Twilight of the Idols, and it turns out he was onto something. Today psychologists, counselors, and researchers refer to the experience of positive transformation in the wake of tragedy as Post Traumatic Growth. The theory was first developed in the mid-1990s by Richard Tedeschi and Lawerence Calhoun (1991), at the time, both professors at the University of North Carolina, Charlotte. The theory of PTG helps to describe the interpersonal, dramatic growth following a single or ongoing series of traumatic events, such as combat, domestic abuse, natural disaster, accidents, or psychological abuse on the job.

In the beginning, many of us hold what Janoff-Bulman (1992) refers to as a benevolent view of the world, in which people do the right thing, good work is rewarded, and a sense of civility, safety, and care sit at the foundation of our daily experiences. We engage with others with positivity and compassion and expect such dispositions to be reciprocated.

Then, one day there is a catastrophic quake that creates crater-size cracks in our philosophy of being. These are not everyday slights, hurts, or illnesses but hyper-tragic events that shake our core and make it no longer possible to carry on as before. It is not the event that defines the level of traumatization but the ways in which the event dismantles our world view. Now the community we once thought of as safe and predictable encompasses unexpected disasters, mean-hearted attacks, and dangers lurking in the corners where we once found refuge. The trauma creates a fissure, dividing our lives into distinct before and after categories, the two halves unrecognizable to each other. At this juncture, what psychologists call the  “assumptive self,” is shattered and we are forced to look at the pieces and decide whether to leave them on the ground or reconstruct them into something we can live with or perhaps even thrive inside (Joseph, 2011).

Rabbi Harold Kushner (1981) in his groundbreaking book, summed it up this way, “In the final analysis, the question of why bad things happen to good people translates itself into some very different questions, no longer asking why something happened, but asking how we will respond, what we intend to do now that it has happened.” Our answers to those questions have the power to change everything.

The Two Roads Diverging in the Woods

It is not the trauma event that determines our emotional well-being, but how we assimilate the tragedy into our conceptual framework and make accommodations that allow us to move forward in a new way. PTG does not occur in the wake of all challenging events. Instead, it is reserved for those circumstances when our emotional state, physical health, economic outlook, or career trajectory are unexpectedly dismantled and disseminated to the point they are unrecognizable to our former self. At this moment, two paths diverge in the woods. Path one leaves us reeling in the pain, paralyzed, unable to respond to our new circumstance. Such a state may leave us fearful, angry, bitter, and stagnant. Path two, on the other hand, is marked with a bold sign stating, “To move forward you must leave your former self behind.” On this path’s journey, we can no longer fit into our old clothes, conceptions, or assumptions and must formulate a fresh identity, with new goals, connections, wonders, and beliefs about how the world works and our place within the universe.

The Selection of the Empowered Path

Selecting the empowered path labeled PTG by no means minimizes or legitimizes the wrong inflicted or the pain incurred, for surely if we could have elected to avoid the combat, attack, or emotional abuse on the job we would have. Instead, PTG is a type of Kintsugi, meaning “golden joinery,” the name given to the ancient Japanese art in which broken pottery is repaired using a gold lacquer, giving it a new look and purpose, while still honoring its shattered history (Kumai, 2018). After all, PTG is not rose-covered glasses that give the illusion of well-being while masking calamity. Authentic PTG invites a completely new existence in which we must reframe our strengths and recalibrate our mission.

The Power of Curiosity

But, how do we take the PTG path? It begins with cognitive exploration, as we tap into our curiosity and excavate new understandings of the tragedy. Research indicates that explicit memories are typically stored in the hippocampus, as an orderly series of events, allowing us to contextualize our narratives and connect them to pertinent sounds, smells, and feelings. In contrast, traumatic experiences are stored as implicit remembrances in the reptilian part of the brain and re-experienced as sensations and motor patterns instead of chronological stories with plots, characters, and settings. Such memories are easily triggered by smells and sounds, evoking a full-body experience when re-activated.

Writing as a Tool for Meaning-Making

The act of writing often invites trauma survivors to record the detailed storyline of what happened to us and contextualize the narrative into our larger experiences. Self-disclosure on paper helps to alleviate the nonconscious replaying of traumatizing events and gives the writer space to put a storyline to the feelings, slowly untangling the enmeshed emotions. Research shows that trauma victims who spent as little as fifteen minutes a day writing about their trauma, healed at a faster rate than those who wrote on general topics or didn’t write at all (Pennebaker, 1999). This writing about pain process evokes what scientists call “deliberate rumination” or the act of consciously thinking about the experience in an effort to gain deeper understandings, a necessary first step in positive transformation or PTG (Tedeschi, Shakespeare-Finch, Kanako, & Calhoun, 2018).

Through deliberate rumination, we come to an understanding aptly expressed by the psychologist and Holocaust survivor, Viktor Frankl (1992), “When we are no longer able to change a situation, we are challenged to change ourselves.” Within this introspection, a seismic shift occurs, allowing some trauma victims to experience PTG which is marked by five frameworks as expressed by Tedeschi and Lawrence (1996).

First, within the trauma, we find new opportunities, such as the car accident victim who lost his legs who goes on to found a nonprofit to support wheelchair-bound athletes. Second, we experience a deeper connection within our prior relationships and often forge new bonds with other trauma survivors, such as the workplace bullying target who finds camaraderie and insight by participating in an international research team studying workplace abuse and lobbying for protective legislation. Third, we acquire a fresh appreciation for our inner strength, realizing we can overcome great obstacles and set new and higher standards for ourselves than previously imagined.  Fourth, we experience greater love and appreciation for life, prioritizing relationships and contributions, over social status and monetary wealth. Fifth and finally, as survivors, we tap into a new spiritual domain that puts us in union with a belief in something greater than ourselves (Tedeschi, Shakespeare-Finch, Kanako, & Calhoun, 2018).

In closing, on the other side of trauma awaits an opportunity to assign new meaning to our being, reframing our conceptions of the world, and drawing ourselves closer to a divine purpose that invites a positive and consequential existence with people who see our worth and environments that allow us to live into our life’s mission.

Pennebaker, J. W. (1999). The effects of traumatic disclosure on physical and mental health: The values of writing and talking about upsetting events. International Journal of Emergency Mental Health, 1, 9–18.