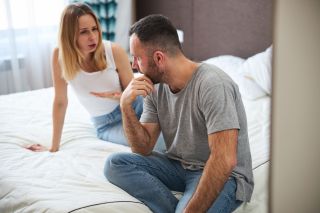 Fact: Every couple experiences conflict. Thankfully, that’s not a bad thing. Anytime you bring together two independent and equal adults in any type of partnership, there is going to be friction. Differences of opinion are inevitable, and the sign of a relationship where partners share power and are comfortable in voicing their opinion.

We often don’t get to see other couples “behind the scenes” so we have no idea if they argue and about what. It’s all a bit mysterious, which can create doubt if you imagine other couples don’t have any conflict and certainly don’t argue about the things you bicker about with your partner.

It’s time to peek inside other romantic relationships to see what’s really going on behind closed doors. Learning about what other couples fight about can help you realize just how normal some of your own arguments are, and also help you talk through issues ahead of time to avoid more damaging fights.

What are the most common hot-button issues? To identify them, over 100 participants listed the ways partners could upset, irritate, hurt, or anger each other.1 Here are the top 10 behaviors that can upset a romantic partner, ranked from the most to least mentioned:

1) Condescending: Treats you as stupid or inferior, acts like he/she is better than you

2) Possessive, Jealous, and/or Dependent: Demands too much attention or time; generally acts jealous/possessive/dependent

6) Inconsiderate: Doesn’t help clean up, burps in your face, leaves the toilet seat up or down, etc.

9) Sexually Withholding or Rejecting: Refuses to have sex, doesn’t act interested, or is a sexual tease, but not in a playful way!

10) Quick to Sexualize Others: Talks about the attractiveness of others, talks about others as sex objects, idolizes someone on TV, etc.

A similar study examined whether certain topics led to more serious conflict.2 Though they didn’t find evidence of particular subjects resulting in different types of arguments, they did identify the following top five overall topics couples argue over:

3. Communication: How well partners communicate and the degree of conflict

4. Leisure: How couples should spend their free time, what they should do to have fun

5. Intimacy: Dealing with issues related to sex, as well as physical and psychological closeness

Finally, in a recently published study, researchers surveyed over a thousand people and found that communication was the most common source of conflict for all couples.3 Other high-ranking conflict topics were: household chores, decision-making, finances, problematic partner habits or behaviors, role expectations, screen time, sex, and time management.

There is quite a bit of similarity across studies in terms of what couples argue about. In fact, conflict-provoking topics are fairly consistent across cultures.4 A study of 2,600 married couples from Britain, China, Russia, Turkey, and the United States found that the most common sources of conflict were the division of labor, finances, raising children, and sex, and that women were more likely to report problems than men.

What Does This Mean for Your Relationship?

Clearly, relationships require navigating a minefield of conflict triggers. There are two ways to look at this information. You could use it as a checklist to see how many of these triggers your partner is guilty of and evaluate your relationship accordingly. But before doing that, you should realize that when researchers compared happy and unhappy married couples in a 2019 study they found that everyone tends to argue about the same things: kids, money, in-laws, and intimacy.5 In many ways we’re all in this together. You’re not alone.

The better way to use this information is to realize that these topics are highlighted because they’re so common. The fact that you and your partner argue about many of these is not an indictment on you as a couple. With that in mind, disagreements should feel less intimidating. Really, for the good of your relationship, you and your partner should be much more willing to argue to help keep small problems small. Also, when discussing issues with your partner, the cross-cultural study also found that when spouses were kind to each other, it helps lessen the negative impact of a conflict.4 Conflict is unavoidable and ultimately part of a strong relationship.

Dr. Gary W. Lewandowski Jr. is the author of Stronger Than You Think: The 10 Blind Spots That Undermine Your Relationship…and How to See Past Them .https://www.amazon.com/gp/product/0316454710