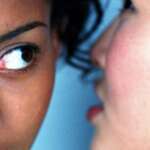 And that fun one-night stand your neighbor had last weekend – would you describe her actions as adventurous, or “skanky?”

The word slut is a common slur in our modern-day vernacular. No doubt, it still carries weight if said with malicious intent.

But in recent years, the word has become deeply ingrained into our culture to the point where people say it too easily and too casually.

As innocuous as using pejorative terms may seem when used in reference to clothing or the activities of others, they undoubtedly still imply negativity surrounding female sexuality.

And using them just validates the societal standard of a perfect, virginal-until-marriage, demure woman as an ideal.

I’ve often asked myself “What can we do about this nasty, negative word choice that is so standard in our culture?” Maybe learning more about the word itself – and more empowering words we can use instead – is a good start.

What Are We Really Saying?

Many of us have been called a slut at some point in our lives — or have thrown the epithet at someone else. But what does it really mean?

The word “slut” originates in Old English, meaning a “messy, dirty, or untidy” woman or girl. Because of this, it was frequently used as a term for kitchen maids and servant girls. By the 15th century, the word took on the meaning of a “promiscuous woman” as well.

Think about it: Have you ever called someone a slut, whether in jest or seriously? What did it mean to you? And what do you think it meant to the person it was directed toward?

Slut-Shaming: Are You Guilty, Too?

To slut-shame means to “degrade or mock a woman because she enjoys having sex, has sex a lot, or may even just be rumored to participate in sexual activity.”

Most of us, whether we realize it or not, have judged or degraded someone (usually a woman) for being sexual, having one or more sexual partners, acknowledging sexual feelings, and/or acting on sexual feelings outside of marriage.

As a culture, we are quick to use words that paint female sexuality as disgraceful – even if we don’t realize that we are doing it.

Think: Have you ever called yourself (or someone else) a slut when your true feelings weren’t ones of disgust or disapproval?

Did you even consider using an alternative word? Or was slut the first thing – almost the natural thing – that came to mind?

And more importantly, what consequences do your words really have?

Slut-Shaming Can Have Serious Repercussions

For some young women, the stigma of “slut” is so hurtful that it leaves their lives in ruins.

Take Rehtaeh Parsons of Canada, who was allegedly raped by four boys who distributed photos of the attack online. She was afterwards bullied and slut-shamed mercilessly by her peers to the point where she decided to take her own life at 17 years of age.

Her mother, Leah Parsons, told Canadian news source CBC, “She was never left alone. She had to leave the community. Her friends turned against her. People harassed her. Boys she didn’t know started texting her and Facebooking her, asking her to have sex with them. It just never stopped. People texted her all the time, saying ‘Will you have sex with me?’ Girls texting, saying, ‘You’re such a slut.’”

This story is a modern tragedy, fueled by cyber-bullying and slut-shaming. The girls and boys who taunted Rehtaeh so cruelly probably had no idea how deep their words cut until it was too late.

Why did so many of her peers turn on her? Why did other girls – some of whom conceivably had endured similar experiences (because hell, they live in this messed-up society, too) – call her a slut and disown her as a friend?

While the blame for the crime rests on the shoulders of the alleged rapists, it is possible that if Rehtaeh hadn’t been labeled a “slut” and endured the cruel bullying that she did, she might be alive today.

Tragically, this type of cyber-slut-shaming is not uncommon among the younger generations.

Imagine how it would feel to be that teenage girl who everyone is whispering about in the halls. To have hurtful names like “slut,” “whore,” and “skank” assigned to you by people who barely know you. To be judged harshly and without caution for engaging in sexual activity, as most curious teens do.

These young women were intensely slut-shamed, and had their very traumatic experiences invalidated by judgment from their peers. Their very worth was brought into question because people chose to side with the rapists instead of the victims.

Slut-shaming is rape culture, plain and simple. And for some people, it is utterly life-destroying.

Slut-Shaming Doesn’t End Just Because We Grow Up

Whether in the dating world, the professional arena, education, or in friendships, adult females are not immune to slut-shaming either.

Women are not only the favored targets of slut-shaming, but very often the perpetrators as well. Due to generations of internalized sexism, women often reject their sexually promiscuous peers as worthy companions or friends – even as adults.

A Cornell University study puts this theory to the test, revealing that college-aged women are much less likely to form deep friendships with promiscuous women.

When most of us have spent our childhoods being taught that gaining male validation is the route to power, and even happiness, it is not surprising that many women will view their sexually explorative peers as threats. This may cause women to lash out against other women in an attempt to rise above the competition.

Is any of this fair? No.

Is it valid? Hell no.

Does it hurt women of all races, ages, and sexual orientations? Yes.

Internalized sexism is a disease, and by carelessly throwing around sexist, hurtful epithets like “slut” and “skank,” we all act as the carriers.

In movies, on television, in magazines, and in our communities, people throw around the term “slut” willy-nilly when talking about women. But men are held to a very different standard.

As a society, what are we teaching our children? that a girl or woman is a dirty, unclean, and unworthy because she has sexual desire? that because she is female, she should save herself for marriage or she is a whore? that women should ignore or otherwise not act upon sexual desires even though men should and do?

Why do we accept sexual exploration from our sons but not our daughters?

It’s simple: The word slut is a decidedly female insult, and using it enhances gender discrimination.

Dumping the Word Itself

We may not be able to change the way that others talk to each other right away, but we can start by presenting an example with our own behavior.

This is why I encourage everyone to eliminate the word slut from their vocabulary.

For example: The other night, my friends and I were talking about one of our favorite TV shows and discussing how the characters have changed over the seasons.

I refuse to accept that ideology, even in casual conversation. There are so many sex-positive alternatives that we can use.

I stand by my next statement: No harm can come from being more sex-positive and less chauvinistic in our speech patterns. I dare each and every one of you to give it a try.

Next time you want to call a girl a slut, rethink your choice and start chipping away at the double standard by using positive descriptive language.

Try to remember that everyone has a personal choice. While you may not lead a similar life to someone else, it is unfair and unjust to ascribe your values to their character.

And moreover, it sets a terrible example for future generations.

Some women wear sexy dresses and choose to have multiple partners. Others wait until marriage and dress demurely. And some are in the middle.

That doesn’t mean that Group A are sluts, Group B are prudes, and Group C have hit the perfect moral high ground. All choices are both fabulous and individual.

Let’s take the word slut out of our vocabulary – not as a solution to a social epidemic, but as one small step towards eradicating patriarchal double standards.

Keep your Pet Occupied at Home

How to Stay Away from Toxic People.