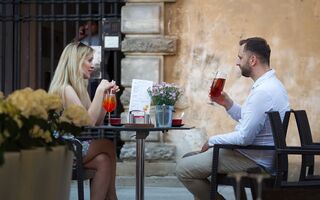 How selection of venue reflects values.

First dates are for first impressions. We size up potential paramours through everything from clothing to conversation, attitude to attire. Desiring to avoid narcissists and other toxic personalities, we are attuned to red flags during the early stages of a relationship, when we are most objective and less invested.

But beyond perceiving flamboyance, flash, and fashion, sociocultural preferences may provide additional clues to character. So what does your date’s choice in dining, entertainment, or culture say about their personality and their suitability as a potential mate for you?

Courtship caveat: Beware of jumping to conclusions. Before you judge relationship potential by restaurant selection, consider the evolving character of the narcissistic personality.

Hanna Shin and Nara Youn, in a study entitled “How Insecure Narcissists Become Cultural Omnivores” (2020),[i] examined how the personality traits of narcissism and psychological insecurity impact cultural consumption. They note that traditional elites — people who possess a high amount of “cultural capital” by virtue of their social class or education, distinguish themselves through participating in high culture. Frequently referred to as “snobs,” Shin and Youn note such individuals showcase their superiority by participating in highbrow culture. Yet this class has apparently evolved from sophisticated snobs into what prior research describes as “cultural omnivores” who not only enjoy highbrow culture, but also lowbrow culture.

Regarding definitions, Shin and Youn note that according to the Cambridge Dictionary, highbrow is defined as “involving serious and complicated or artistic ideas,” and lowbrow as “not complicated or demanding much intelligence to be understood.” They note that the Oxford Dictionary of English contains slightly different definitions, defining highbrow as “intellectual or rarefied in taste” and lowbrow as “not highly intellectual or cultured.”

Shin and Youn translate these definitions into practical terms, explaining that for example, highbrow art is consistent with the standards of the cultivated, upper-class, and lowbrow art, produced for or by lower status groups or “ordinary” people, is often more popular, and less sophisticated.

Pizza and Perrier? Definitely a possibility on a first-date menu for a narcissistic cultural omnivore. These self-centered suitors may take dates to a venue or event that represents a mixture of high and lowbrow culture. Although Shin and Youn recognize that cultural omnivores are often just as “well-heeled” as so-called cultural elites, they fail to make distinctions based on class, and are just as likely to enjoy products such as craft beer and hip-hop music, as traditional highbrow products such as fine wine and opera.

Shin and Youn recognize other examples of cultural omnivorousness as including dance music incorporating flavors of classical or jazz, high-end dining with personalized versions of popular dishes such as wings and waffles, and art galleries that display graffiti alongside classical paintings.

In assessing how venue selection reflect values, which is important if we are attempting to avoid becoming involved with narcissists or other toxic personalities, we apparently have to broaden our perspective. In their research, for example, Shin and Youn list highbrow cultural activities as “going to a classical symphony orchestra,” “visiting art galleries,” and “listening to contemporary classical music,” and lowbrow cultural activities as “listening to pop music,” “going to see graffiti and street art,” “going to pop concerts,” and “going to see street performances and busking.”

The counterintuitive aspect of this research is that most people would not ordinarily associate grandiosity with graffiti, or street vending with vanity. It appears, therefore, that narcissistic tendencies cannot reliably be detected through venue selection—whether modest or pretentious. Not to mention the fact that many of the kindest, most generous people in the world may be just as likely to consume the same types of culture as the toxic personalities we try to avoid.

Accordingly, although first dates are the first step in forming first impressions, only relationship-building over time will reveal the person behind the persona.